As you may or may not know, we have been tracking a considerable amount of benchmark predictions over the past month or so, to get a feel of where the race is going. We tracked everything, from polling aggregation sites to a number of poll and non-poll based models, to the prediction markets, and even the GJP superforecasters.  The trends are summarized in the following graph: 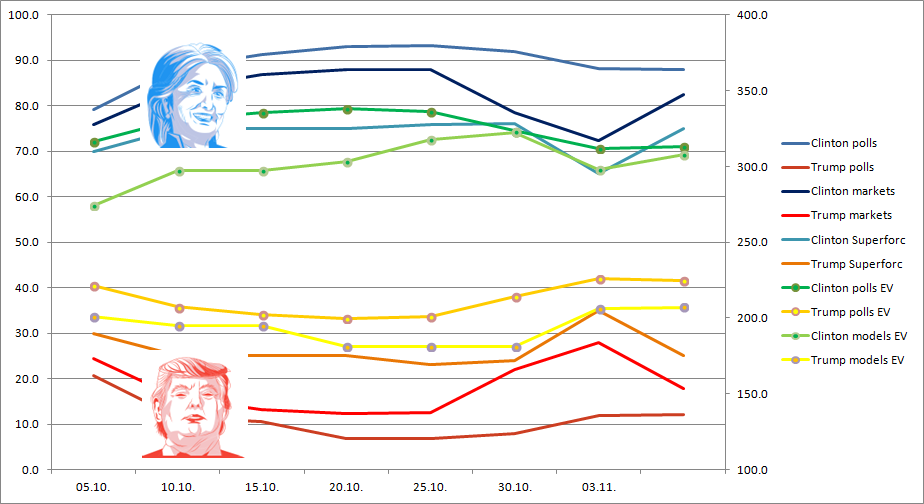 It includes the average across all polling aggregation sites that we used (Nate Silver’s FiveThirtyEight, New York Times’ the Upshot, the Daily Kos, the Princeton Election Consortium, Real Clear Politics average of polls, Huff Post, and PollyVote) – these are the farthest two lines showing a considerable difference in predicted probabilities of winning from both candidates. Even after the Clinton email investigation announcement by FBI director James Comey they adjusted downwards by only a slight margin. The second and third pair are prediction markets (dark blue and light red) and superforecasters (light blue and orange) which both seem to exhibit a similar trend – they started to move closer together after the email probe 9 days ago, however after Comey’s second announcement this weekend relieving Clinton of any responsibility, they have adjusted back to high numbers for Hillary and low numbers for Trump (the markets give her an >80% chance, whereas the superforecasters give her a 75% chance). The final two pair (graphs with little dots within them) show the estimated total electoral votes from the polls and from the models that we’ve used (the Cook Political Report, the Rothenberg and Gonzales Political Report, and Sabato’s Crystal Ball). They show a slight convergence but also point to a strong Hillary victory.

Individually this is what each of our benchmarks are saying (read about the specifics here). Data is from November 7th 2016.

1. Polling aggregators – a clear victory for Hillary Clinton. Only FiveThirtyEight has been cautious, the others are mostly confident that Hillary should win a landslide (notice the electoral college predictions).

2. Models – I’ll put both types of models here, the political analyst-based and the pure non-poll based models. They are both saying the same thing – a clear victory for Hillary. Even if all the toss-ups go to Trump.

3. Prediction markets – they have rebounded to again point to a clear victory for Clinton. After being skeptical last week, upon the news from this weekend the markets reacted quickly and on Monday changed their trends back to support Hillary. 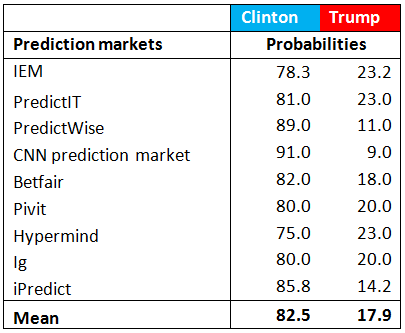 4. Superforecasters – the final group exhibited the same behavioral pattern as the markets – from being bearish on Hillary just a few days ago, only to restore to their priors as of yesterday. Interestingly, by state they picture Florida and North Carolina to be a coin toss, while giving Ohio to Trump. 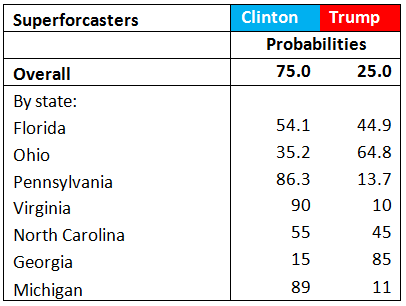 On a state by state level we only look at the swing states, given that every single pollster/predictor gives all the blue states to Clinton and the red states to Trump. There is no disagreement there. Even among the swing states all the benchmarks are saying that PA, VA, NH and CO are going to Clinton, and that IA is going to Trump. As for the rest, most of them also give NV to Clinton (RPC gives it to Trump), FL and NC are in most cases toss-ups, while OH is in most cases going to Trump.

The first table shows the probabilities of winning per each state for each of the selected benchmarks, whereas the second table is simply calling the states as per the EV map each of the models/predictors has produced on their site. The numbers are thus electoral votes per state. The color shows who they were assigned to.